Return to previous page
Home About Us

No matter your skill level or shooting sport, Forster Products focuses on your needs and listens to your requests.

Our ProStaff is a special advisory panel of accomplished shooters, reloaders and gunsmiths whose input help us improve upon and develop the products that you need for the sport you love. Their shooting specialties and backgrounds differ, as do their firearms and reloading preferences.

However, there is one common denominator that unifies them: They are all exceedingly good at what they do. And, like most high achievers, they’re all very serious about improving the tools they use so they can continue to advance their own skill levels.

Count on the professionals at Forster Products, along with our ProStaff experts, to help you enhance your reloading and gunsmithing skills. 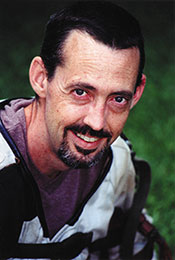 Glen Zediker was a long-time ProStaff member for Forster Products.  He distinguished himself as an NRA High Power Rifle competitor, and was acknowledged throughout the firearms industry as an AR15 specialist, but he also competed with bolt action rifles.

Glen had a knack for telling it like it was. He was so good at it, that he’d authored a number of books for shooters that were interested in honing their abilities for success. He listened, asked questions, and then pulled out and communicated the precise details in clear, understandable terms. Many shooters credited Glen for helping them improve their skills. His most popular titles included Handloading for Competition and his three-book The Competitive AR15 series. His book Top Grade Ammo was written for “the person who wants a very easy to digest, easy to follow means to handload TOP quality ammunition.”

Glen was an amazingly talented person with broad interests and knowledge.  His wisdom and giving nature will be missed by people from all walks of life, especially his sons Matthew and Charlie and his sister Diane. 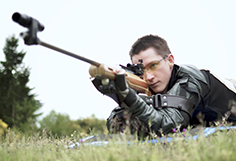 Kelly Bachand is a Washington State native with an impressive resume:

An accomplished wind reader, Kelly uses that skill to help him accurately shoot at targets at great distances, from 1000 yards up to even one mile away. He used this skill as a coach for the U.S. Under-25 Rifle Team as well as on Top Shot, where he competed against several other contestants for the namesake prize. 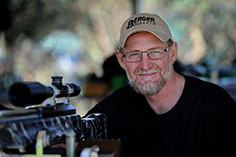 Stuart Elliot grew up on a farm on the Lachlan River near Forbes in NSW, Australia. He began shooting at the age of 8 with his father’s BRNO model 1, 22 rimfire (which he still owns). After moving to Canberra, he went to the SSAA Majura range and bumped into some “benchrest shooters” who gave him a few shots from their custom rifles. He was instantly hooked! He’s proud to say that he’s one of the people who started International Rimfire Benchrest (IRB) and also introduced 1000 yard Benchrest shooting competition to Australia in 1998 at the Canberra Rifle Club.

Both Stuart and his wife Annie have qualified for the Australian Benchrest Hall of Fame in two different championship styles of rifle shooting. Together, they shoot every possible form of Benchrest from the original, traditional group shooting events to Hunterclass score shooting, to Long Range with 500m and 1,000 yard BR plus Rimfire and F Class. 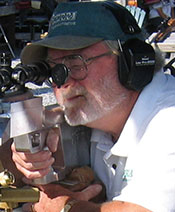 Rich Machholz has been a member of the Sierra Bullets staff since 1992, and reloads more than two dozen calibers and uses them all. His areas of expertise include centerfire rifles, reloading, load development and data accumulation for centerfire rifles, and long range benchrest competition.

A resident of Marshall, MO, Rich has a varied background, including several types of hunting. His greatest passion is benchrest shooting with an emphasis on the medium and long distances; a venue where Rich has excelled.

Rich’s first experience with Forster’s quality reloading products was with the Forster Products Case Trimmer, which he still uses with a variety of accessories including the Outside Neck Turner. He is also a vocal advocate of Forster’s Co-Ax® Press, Bench Rest® dies and the Co-Ax® Primer Seater which he uses for most of the rifle calibers he reloads.

Dave and Cathy Logosz are more than accomplished shooters – they are shooting enthusiasts. In fact, the two of them share an interest in just about every type of competitive shooting you can imagine, including Cowboy Lever Action Shooting, Handgun Silhouette Matches, and Black Powder Cartridge Silhouette Matches. They also regularly conduct classes in reloading and firearm safety.

Hailing from western North Dakota, Dave and Cathy were recognized by the State’s Shooting Sports Hall of Fame, an honor bestowed upon them by their peers. The honor goes beyond acknowledgement of their skills in competitive shooting (for which they have won many awards), as it recognizes their numerous contributions to further the interest of the target sports for all ages. They were the first couple to receive this award. What an honor!

The couple has traveled around the United States internationally to compete in shooting championships. They estimate that they have been to at least 30+ national and international championships, and consider many of the people they have met to be family. 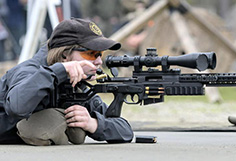 Lara Spanic is a young precision rifle competitor from Wisconsin. She competes in two-day PRS competitions across the United States and Canada, enjoying the unique mental and physical challenges brought by positional shooting under time constraints at targets from 200 to 1,500+ yards. In addition to longrange precision rifle, Lara is a competitor in three-position smallbore and international standing air rifle and is aiming to eventually compete in the Olympics and ISSF World Cup.

She was first introduced to Forster products in her pursuit to load ammunition capable of extreme accuracy at long distances and has become proficient in the reloading process. She currently works with 6XC, 6 Dasher, 6.5 and 6 Creedmoor and is a sponsored shooter for Alpha Munitions, participating in providing testing and feedback on new products. Under the tutelage of her long-distance coach Jim Kauber, she loves learning about ballistics, wind reading, and how to load the most accurate ammunition possible.

Lara has a boundless enthusiasm for gaining and sharing knowledge with others. She finds it especially rewarding to discuss and analyze the mental aspects of shooting sports and is always willing and excited to help others.